The 7th Infantry Division this week welcomed Lt. Col. Khallid Shabazz as its new chaplain during a change of stole ceremony, making Shabazz the Army's first Islamic chaplain to serve at the division level.

Shabazz, the former I Corps deputy chaplain, became the division’s chaplain during the ceremony Tuesday at the Lewis Main Chapel on Joint Base Lewis-McChord, Washington, according to the Army. Maj. Gen. Thomas James, the 7th Infantry Division commander, officiated the ceremony. 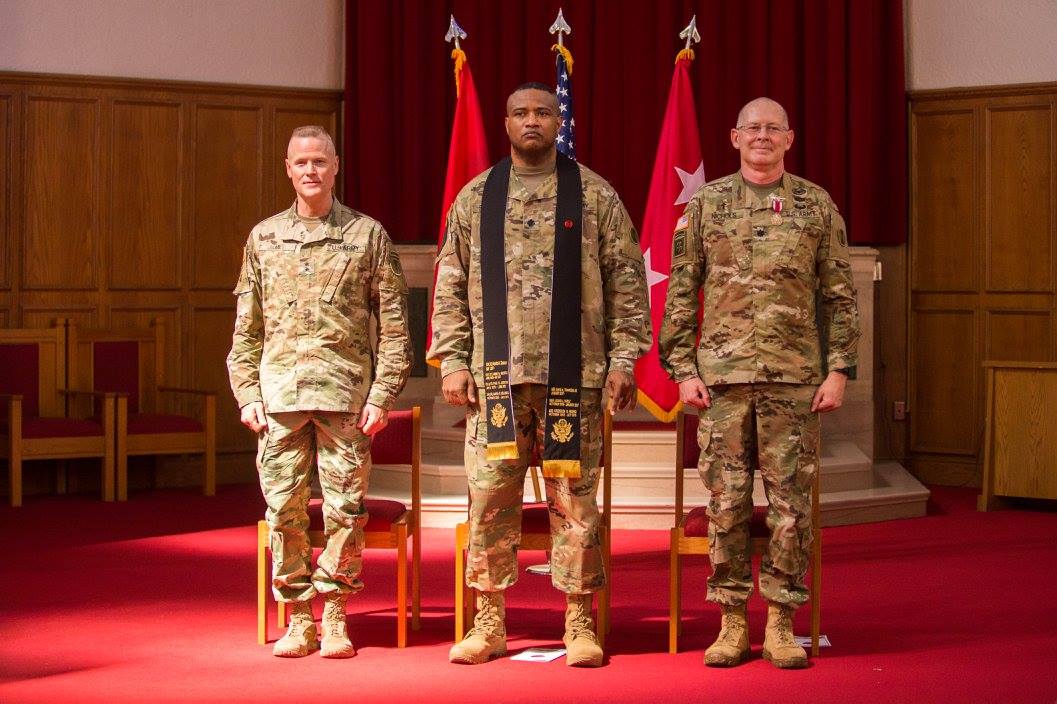 Lt. Col. Khallid Shabazz, center, participates in a Change of Stole ceremony inside the Lewis Main Chapel at Joint Base Lewis-McChord, Wash., May 23, 2017.Photo Credit: Army
Shabazz was selected earlier this year by the Army chief of chaplains and is replacing Lt. Col. Jimmy Nichols, who is headed to Fort Sill, Oklahoma, to serve as the installation chaplain.

"As simple as it sounds, I want to give people a sense of purpose," Shabazz said. "My job is to help them be stronger on the other side of the door than when they came in."

In addition to a doctorate degree and four master’s degrees, Shabazz has a long history of working with soldiers of all faiths. He was raised a Lutheran in Louisiana and converted to Islam as a soldier.

"What has served me well is I was Christian for 28 years," Shabazz said. "I know both sides. I want to meet people where they are. ... My job is not to convert anybody or impose my religion on anybody. My job is to ensure that those people are strong and resilient."

As no religion is endorsed by the Army, the Army Chaplain Corps upholds the concept of pluralism, requiring chaplains to support all faiths.

Throughout Shabazz’s service to the Army, he has traveled the world as a professional military religious adviser, leader and ethics instructor.

While Shabazz does expect some hesitancy from soldiers when they see the crescent moon on his uniform, he is prepared to respectfully deal with resistance by openly working with all faiths.

"The transformative power of loving people, to me, it crosses all so-called faith issues," Shabazz said. "That's what's most important to me. I approach every situation with that attitude and with that respect."

How to Clean a Lawn Mower: An Essential Step to Getting Your...

Tiger Woods found asleep in car at time of arrest; no...

Don't Let A Low Credit Score Hold You Back

11 “In Uniform” Rules Every Military Spouse Should Know