The United States launched a military strike Thursday on a Syrian government airbase in response to a chemical weapons attack that killed dozens of civilians earlier in the week.

On President Donald Trump's orders, US warships launched 59 Tomahawk cruise missiles at the airbase that was home to the warplanes that carried out the chemical attacks, US officials said.
The strike is the first direct military action taken by the US against the regime of Syrian President Bashar al-Assad in the country's six-year civil war. It represents a substantial escalation of the US military campaign in the region, and could be interpreted by the Syrian government as an act of war. 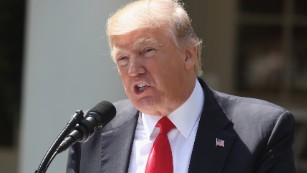 Trump on Syria's Assad: 'Something should happen'

Six people were killed in the airstrike, according to a televised statement by the Syrian's Armed Forces General Command. Russia condemned the strike as an "act of aggression," and Assad's office Friday called it "a disgraceful act" that "can only be described as short-sighted."

"Tonight, I ordered a targeted military strike on the air field in Syria from where the chemical attack was launched," Trump said during short remarks to reporters at Mar-a-Lago, where he ordered the strike just hours earlier. "It is in this vital national security of the United States to prevent and deter the spread and use of deadly chemical weapons."

He added: "There can be no dispute that Syria used banned chemical weapons, violated its obligations under the Chemical Weapons Convention and ignored the urging of the UN Security Council. Years of previous attempts at changing Assad's behavior have all failed and failed very dramatically." 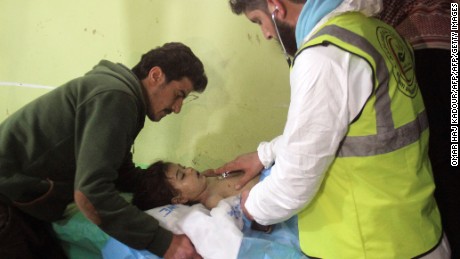 Oil prices leap after US missile strike on Syria

"Initial indications are that this strike has severely damaged or destroyed Syrian aircraft and support infrastructure and equipment at Shayrat Airfield, reducing the Syrian government's ability to deliver chemical weapons," the Pentagon said in a statement.

A US defense official told CNN Friday morning that an initial battle damage assessment from the strike was that 58 of the 59 missiles "severely degraded or destroyed" their intended target. The official cautioned that this is just the earliest assessment using radar and that more robust assessments using satellites and other surveillance is still pending.

Briefing reporters late Thursday night, Secretary of State Rex Tillerson said that the strike did not represent a "change in our policy or our posture in Syria," even though it marked the first time the US had decided to take military action against the Syrian government.

"There has been no change in that status," he said. "It does demonstrate that President Trump is willing to act when governments and actors cross the line ... and cross the line in the most heinous of ways."

Tillerson said the administration felt the strike was "proportional because it was targeted at the facility that delivered this most recent chemical attack."

The US military also showed reporters Thursday night an image of the radar track of a Syrian airplane leaving the airfield and flying to the chemical strike area Tuesday. A second image of bomb damage craters at the airbase was also shown to reporters at the Pentagon.

Tillerson said the US has a "very high level of confidence" that the Syrian regime carried out at least three attacks in recent weeks -- including on Tuesday -- using Sarin and nerve gas. 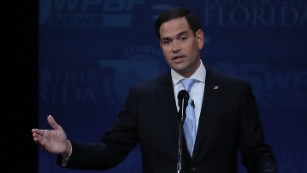 The strikes represented not only an escalation of the US role in Syria, but could have a ripple effect on the US' relations with the Syrian regime's powerful backer, Russia.

Russians were present at the base the US struck, a US defense official said, though the role of those Russians was not immediately known.

Tillerson confirmed that the US military contacted their Russian counterparts about the attack ahead of time, in accordance with deconfliction policies between the US and Russia over military activities in Syria. One of the defense officials told CNN the Russians were only given "very brief notice" prior to the strike.

Russian President Vladimir Putin described the US airstrikes on Syria as "an act of aggression against a sovereign state" that "dealt a serious blow to Russia-US relations," according to a Kremlin statement. Russia said it believed Syria had destroyed all of its chemical weapons and the US strikes were based on a "far-fetched pretext."

The U.S., Canada and Mexico are buying more job-killing...

Sales of new homes bounced back in May, but not evenly

10 Veterans Benefits You May Not Know About

Bond denied for Williamsburg man accused of lying to the...