Aph Ko got tired of hearing that eating vegan was something only white people did. So in 2015, she created a list of 100 black vegans for a website. It included pioneering figures like Dick Gregory and Coretta Scott King and younger, less famous writers, filmmakers, cooks and activists.

“When you say ‘vegan,’ a lot of people tend to only think of PETA, which doesn’t reflect the massive landscape of vegan activism,” said Ms. Ko, 28, a Floridian whose favorite dish at the moment is the spinach pie in “The Vegan Stoner Cookbook.” “The black vegan movement is one of the most diverse, decolonial, complex and creative movements.”

So many other people wanted to be included on the list after it appeared, she started a website, Black Vegans Rock. That spawned a Twitter hashtag (#blackvegansrock) and a T-shirt business. In June, she published ”Aphro-ism: Essays on Pop Culture, Feminism, and Black Veganism from Two Sisters,” a book she wrote with her older sister, Syl Ko.

Vegan cooking and eating are having a renaissance among black Americans, driven in part by movements like Black Lives Matter, documentaries like “What the Health,” and a growing cadre of people who connect personal health, animal welfare and social justice with the fight for racial equality. Athletes like Kyrie Irving of the Boston Celtics and pop stars like the singer Jhené Aiko are bringing a certain pop culture cachet. Cookbook authors and a new breed of vegan soul food restaurants offer culinary muscle.

“I no longer feel like an endangered species out here,” said Zachary Toliver, 26, a writer in Tacoma, Wash., who was on the 100 Black Vegans list and is now a columnist for PETA, the animal rights group, where he writes articles like “Here Are 11 Things You Can Expect to Happen if You’re Vegan While Black.” (No. 1: “You’re still just as nervous about whether or not your white friends properly seasoned the food.”) 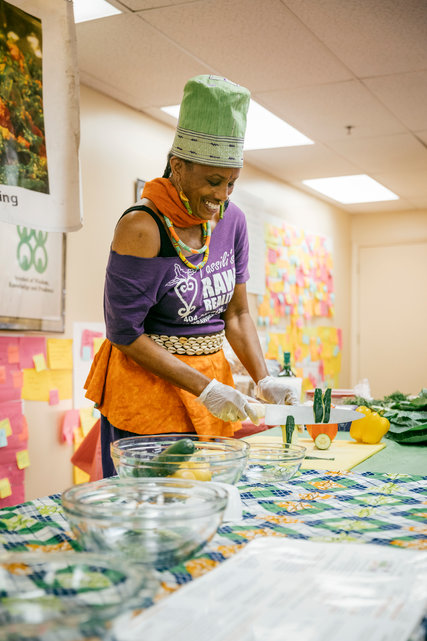 Tassili Ma’at, who owns Tassili’s Raw Reality in the historic West End community of Atlanta, teaches students how to make raw collard salad for Thanksgiving at Sevananda Natural Foods Market. She was vegan for 30 years, and changed to a raw-food diet about eight years ago to improve her health. Credit Audra Melton for The New York Times Like many food trends that seem new, black veganism has historical roots. Eating vegan has long been a practice, especially for followers of religious and spiritual movements like Rastafarianism and the African Hebrew Israelites of Jerusalem, a religious group with black nationalist underpinnings that rose up in the 1960s and still runs a chain of vegan restaurants in cities like Atlanta; Tallahassee, Fla., and Tel Aviv.

Avoiding meat is also a core principle of the Nation of Islam, whose founders believed that pork was at the heart of the slave diet, and preached vegetarianism as the most healthful diet for African-Americans.

Many people who give up eating animal products do it for their health, or for animal welfare. The same is true for the new veganism among African-Americans, but there is an added layer of another kind of politics.

“It’s not just about I want to eat well so I can live long and be skinny,” said Jenné Claiborne, a personal chef and cooking teacher who recently moved to Los Angeles from New York. Her first cookbook, “Sweet Potato Soul,” is due out in February. “For a lot of black people, it’s also the social justice and food access. The food we have been eating for decades and decades and has been killing us.”

Ms. Claiborne, 30, is part of a new generation of vegan cooks who are transforming traditional soul food dishes, digging deeper into the West African roots of Southern cooking and infusing new recipes with the tastes of the Caribbean.

As a result, ideas about the dull vegan stews and stir-fries that were standard-bearers among the early generations of black vegan cooks are changing — albeit slowly. 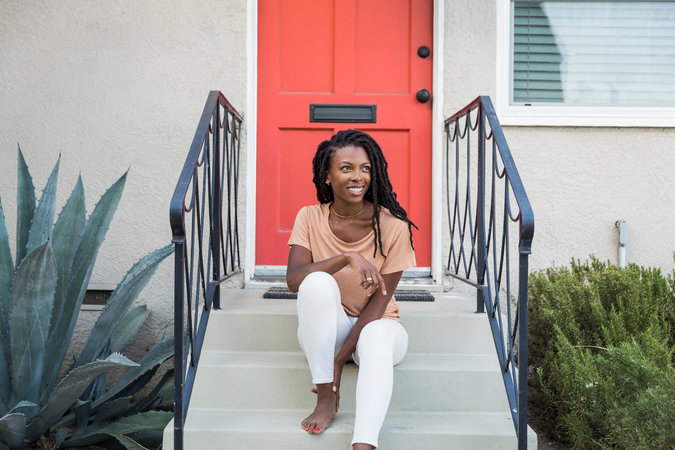 Jenné Claiborne, a private chef and cooking instructor, recently moved to Los Angeles from New York, where she was working as an actor before she became a food blogger and wrote the cookbook “Sweet Potato Soul,” which will be published in February. Credit Emily Berl for The New York Times “Some folks are kind of stuck in the ’70s,” said Jessica B. Harris, 69, an author and a food scholar of the African diaspora. “Their food seems to come with a dashiki. And don’t tell me it’s like fried chicken when it’s tofu.”

Bryant Terry cooks to counter the old ideas about vegan food. The chef-in-residence at the Museum of the African Diaspora in San Francisco, Mr. Terry, 43, wrote “Afro-Vegan: Farm-Fresh African, Caribbean and Southern Flavors Remixed,” a 2014 cookbook that regularly makes it to the top 10 soul food cookbook rankings on Amazon.

His recipe for millet cakes is bright with the brick-red Ethiopian spice blend berbere. He likes to serve it with a sauce built from roasted green peppers, garlic and cilantro, and infused with heat from jalapeños.

“In some ways, it’s a quiet wink to the ’70s-style macrobiotic veggie burgers,” he said. But it pales in comparison to what a new batch of black vegan cooks are doing. “I cook like someone’s grandma,” he added. “What I’m really excited about are some of the younger chefs who are professionally trained and know how to put food together in a new way.”

One of them is Ms. Claiborne, who grew up in suburban Atlanta and moved to New York after college to pursue an acting career. Her father was raised vegan, according to Hebrew Israelite beliefs, and still eats that way 90 percent of the time, she said. She grew up eating everything but red meat, and learned to cook soul food at her grandmother’s side.

Ms. Claiborne wasn’t a vegan when she started a food blog in 2010 as a way to pass the time between auditions. That came a year later, when she got a job at Peacefood Cafe in Manhattan. Now she dedicates herself to countering the notion that soul food has to include meat, and that childhood classics need milk or butter. 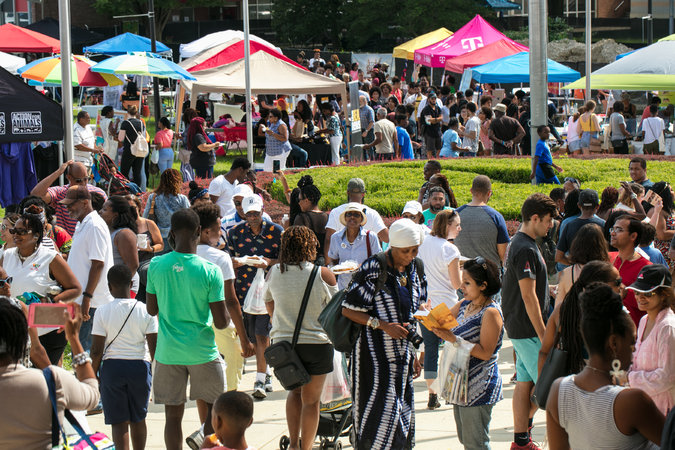 The Baltimore Vegan SoulFest is one of several gatherings dedicated to vegan food, as interpreted by African-American cooks, that have sprung up around the country recently. This event is held in August each year on the campus of Baltimore City Community College. Credit Nate Pesce for The New York Times She adds butternut squash to sweet potato pie to create the texture usually contributed by eggs. Oyster mushrooms stand in for shrimp in Creole étouffée. She puts jackfruit in her jambalaya and cooks down collard greens with soy sauce and smoked paprika instead of pork.

Health is often not enough of a reason for people to give up meat, she said. The challenges that come with being black in America can be. “When it’s bigger than you, and it’s political and it’s spiritual, that is an entrance point for people,” she said.

The toughest cultural touchstone to let go of is fried chicken, she said. “People tell me: ‘I can’t do without the chicken. I’d rather die a painful death than have to give up chicken,’” she said. To help, she created spicy chicken-fried cauliflower, in which she builds a crunchy crust by dipping large florets into heavily seasoned flour and then a wet batter of hot sauce, Dijon mustard and soy milk.

Then came Oprah Winfrey, who challenged her staff to go vegan for a week in 2011 and built a show around it. In 2015, Jay Z and Beyoncé became partners in a vegan meal kit service.

Celebrities continue to join in. Laverne Cox and Danielle Brooks, stars of “Orange is the New Black,” said recently that they were going vegan. And in the current season of “The Real Housewives of Atlanta,” a cast member, Porsha Williams, announced she was a “baby vegan.” 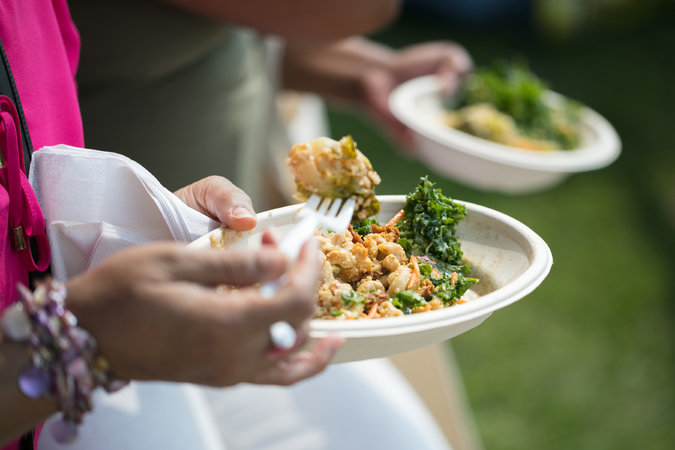 The owners of the Land of Kush restaurant in Baltimore help organize the city’s annual Vegan SoulFest. The offerings at the event, held last August, included massaged avocado kale salad, mac and cheese with homemade soy-based cheese and a brussels sprout stir-fry. Credit Nate Pesce for The New York Times African-American sports stars have embraced vegan diets as a way to improve their performance. Serena and Venus Williams say they try to eat vegan most of the time. The former N.F.L. linebacker David Carter (nicknamed the 300-Pound Vegan) stopped eating animal products a few years ago.

In an article this month in The Bleacher Report, Kip Andersen, the director of the documentary “What the Health,” was quoted as saying that so many professional basketball players had given up meat that the league might soon be called the N.V.A. — the National Vegan Association.

Hip-hop artists have embraced veganism as part of a larger effort to improve the health of their fans. Last year, the Atlanta based rapper who goes by the name Grey had a minor internet hit with a vegan Thanksgiving rap. And in April, several vegan-friendly performers gathered at the Schomburg Center in Harlem to formally introduce health and wellness as “the 10th element of hip-hop.” (Although there is some debate over what that list should be, the other nine on that list are breaking, M.C.’ing, graffiti art, D.J.-ing, beatboxing, street fashion, language, knowledge and entrepreneurialism.)

The event was part of Hip Hop Is Green, a health initiative started by Keith Tucker of Seattle that produces dinners and concerts that promote plant-based eating.

Tassili Ma’at, 60, owns Tassili’s Raw Reality in the historic West End of Atlanta. She raised her youngest two children as vegans, and now eats only raw food. She’s a member of the Atlanta chapter of Hip Hop Is Green, which she says is a way to help young people identify veganism as both “something cool and something political.”

“I acknowledge my customers for being modern-day revolutionaries without picking up a gun or having to throw a grenade or pick up a picket sign and carry it down the street,” she said. “We are defying the death industry.” 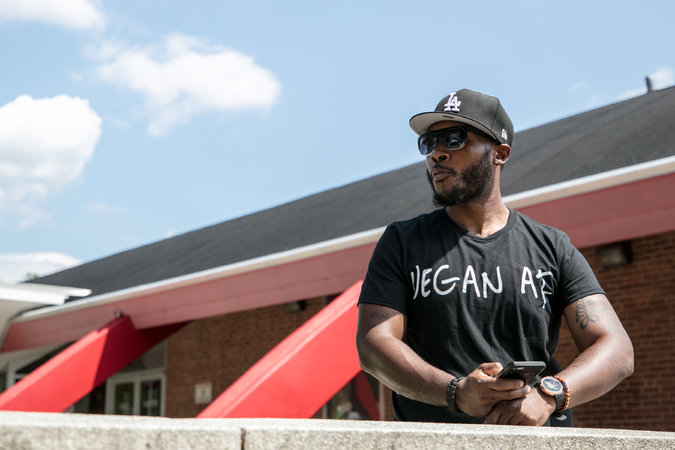 Kirk Dutton wore his favorite vegan T-shirt to Baltimore’s annual Vegan SoulFest in August. Credit Nate Pesce for The New York Times Then again, sometimes it’s just about eating something delicious and having fun. To that end, cooks in several cities have begun hosting black-focused vegan food festivals and “mac downs,” where hundreds of people compete in vegan mac-and-cheese competitions.

Theirs is one of dozens of new black-owned vegan restaurants that have popped up recently in cities like Los Angeles, Detroit and New York.

“You can’t say all vegans have to support animal welfare or social justice,” Ms. Wright-Brown said. “We aren’t going to beat you in the head. This is about having compassion. We just want people to eat some vegan soul food and have some fun.”

Vegan stepping out for health and other causes

Jessica Simpson Hosted a Fashion Show for Army Wives and...

FBI Director Comey back in spotlight

6 Ways to Get More Out of Your Workout