A look at how much Americans spent on sports over the past 12 months shows that it’s true that they value experiences over things.

Especially when it comes to millennials.

“There’s been a lot written about folks focusing their spending on experiences and not things. What we saw in this survey tends to be further evidence of that. Sporting events were certainly the biggest cost,” said Matt Schulz, senior industry analyst at creditcards.com, which conducted the research. 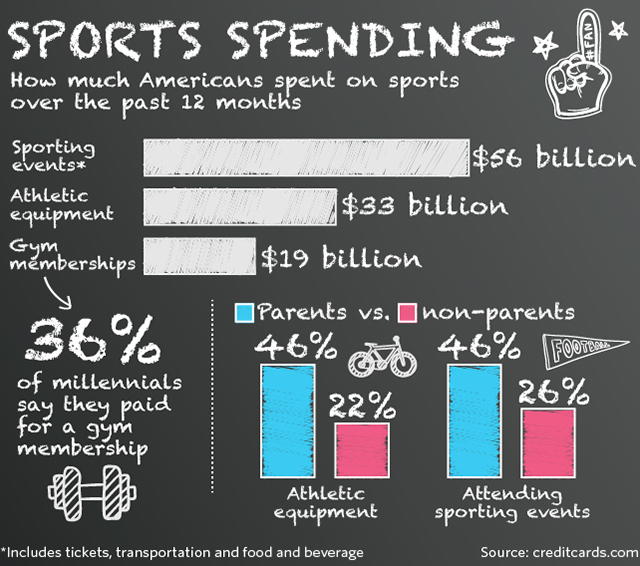 Over the past year, Americans spent a whopping $100 billion on sports — and over half of it on sporting events.

They spent $56 billion on attending sporting events, including tickets, transportation, food and beverages, according to the survey, which sampled over 1,000 adults.

A further dive into the results showed that millennials spent the most on gym memberships, as 36% of 18- to 36-year-olds paid for a membership — twice the percentage of people older than them.

Another finding: parents spent more than twice as much as non-parents on athletic equipment (46% vs 22%) and there was almost as large a difference when it came to spending money on sporting events: 46% of parents did, but only 28% of non-parents.

This is the first time creditcards.com, a credit card marketplace that also aims to educate consumers, has looked into how much people spend on sports. “It’s interesting to see who was doing the spending and get a feel for what people spend the most money on. Sports is incredibly big business in America,” Schulz said.

Dogs on Deployment is excited and proud to announce that our...

How to Clean a Lawn Mower: An Essential Step to Getting Your...

The Corps' quest for the best rifle for infantrymen