At least a dozen dogs in Florida are sick with "dog flu," but what exactly is this disease and where did it come from?

So far, 12 dogs in Florida have tested positive for a strain of dog flu virus known as H3N2, and many other dogs in central and north Florida are suspected to have dog flu, according to a statement from the University of Florida College of Veterinary Medicine. All of the dogs that tested positive for H3N2 recently attended one of two dog shows in the area, or were around dogs that attended the shows, the statement said. [11 Ways Your Beloved Pet May Make You Sick]

Although this is the first time that this strain of 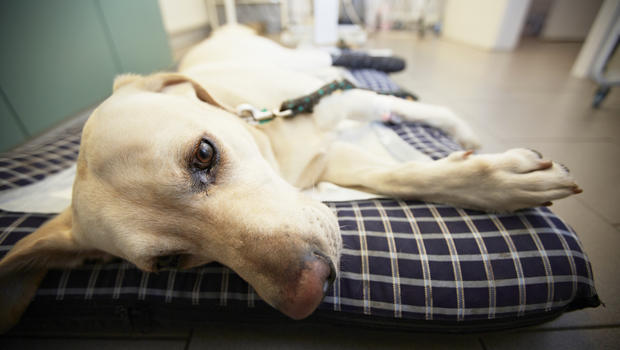 Dog flu outbreak: How to protect your pet

The H3N2 virus has also been reported to infect cats in some cases.

Can people catch it?

So far, no cases of dog flu have been reported in people, and there's no evidence that dog flu can spread from canines to humans, the CDC says. However, there's always a possibility that the virus could mutate in a way that would allow it to infect humans. Because of this, the CDC says it is monitoring dog flu viruses closely.

Where did dog flu come from?

The H3N2 strain was discovered in South Korea in 2007. It is thought that the virus originated when a type of bird flu virus adapted, and became able to infect dogs, the CDC says. Cases of H3N2 dog flu were confined to Asian countries until 2015, when the virus appeared in Chicago and other parts of the Midwest. At that time, the virus caused a large outbreak in the area, affecting more than 1,000 dogs.

The H3N8 virus is thought to have adapted from a type of flu virus that infects horses. This "horse flu" virus was known to exist for decades before it was detected in dogs, the CDC says.

What symptoms does it cause in dogs?

Dogs with dog flu may sneeze, cough and have a runny nose, according to the University of Florida. Dogs may also get a fever, have a decreased appetite and appear lethargic during the first few days of the illness, the university said.

Most dogs recover from the illness within a few weeks, but about 20 percent develop pneumonia, which can be serious and require veterinary care, according to the University of Florida. If you think your dog has dog flu, call your veterinarian to discuss whether your dog needs to have a diagnostic test for the virus.

How do pets catch dog flu?

Dogs can catch dog flu from being around sick dogs or from being in an area that's contaminated with the virus.

Dogs are most at risk of becoming infected if they participate in events with other dogs, or are housed with other dogs, such as at boarding kennels, day care centers, shelters, veterinary clinics or grooming parlors. Dogs that simply stay at home and walk around the neighborhood are at low risk for becoming infected, the University of Florida says. [10 Deadly Diseases That Hopped Across Species]

What can pet owners do to protect their dogs?

If there are confirmed reports of the virus in your area, be careful about taking your dog to events or areas with other dogs, the University of Florida advises. There is also a vaccine against H3N2, which makes infection with the virus less likely.

In addition, if your dog is diagnosed with dog flu, you should keep your pet away from other dogs and cats for four weeks. Although dogs typically recover sooner than this, they can remain contagious for about a month, the University of Florida says.

A Look at The United States Bomber Force

What It's Like to Be HIV Positive in the Military

Sanctuary city bans could spread to other states after Texas...