An Alabama man being booked into jail for public intoxication had a stolen handgun hidden in a certain body cavity, according to police who noticed that the defendant was walking “strangely” upon arrival at the county jail.

Jesse Roberts, 23, was collared early today by cops responding to a 911 call about a prowler near a residence in Elkmont, a town outside Huntsville.

Seen above, Roberts was arrested and transported to the Limestone County jail, where corrections officers took notice of his odd gait.

As Roberts was being searched, an unloaded Jimenez Arms .380-caliber pistol fell from his rear end into his underwear. “I immediately considered that he 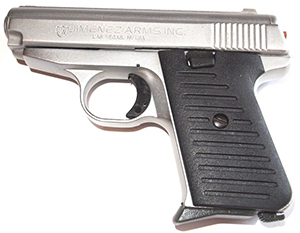 defecated on himself before noticing a familiar shape in the form of a pistol in his boxers,” a jailer noted in a report, according to Sheriff Mike Blakely.

Upon recovering the unloaded weapon from Roberts’s drawers, cops determined that the $100 handgun had been reported stolen out of Florence, a city 50 miles away.

Along with a misdemeanor public intoxication rap, Roberts is facing charges for receiving stolen property, introducing contraband into a correctional facility, and carrying a concealed weapon without a permit. Roberts is locked up in lieu of $7250 bail.

The Army is testing a more powerful anti-drone laser

Thomas set to be longest-serving justice on Supreme Court

Sales of new homes bounced back in May, but not evenly