Ron Leavitt was driving from a master gardener class to his Naples, Fla., home three months ago when he received a surprising call from his wife.

"She said, 'The FBI is here to talk to you about Burlington College,'" he recalled. "'When are you going to be home?'"

The semiretired orthopedic surgeon had moved from Vermont to Florida five years earlier, but his association with the shuttered liberal arts college — and the wife of a United States senator who served as its president — had followed him to the Sunshine State. When he returned home to his gated community later that afternoon, Leavitt found two Federal Bureau of Investigation agents waiting for him with plenty of questions about a $30,000 donation he had made to the school.

"It was a little strange," he said of the unexpected visit.

Leavitt is one of five people formerly associated with Burlington College who have confirmed to Seven Days that they were contacted, interviewed and, in some cases, subpoenaed by federal authorities over the past 15 months. While much about the inquiry remains shrouded in mystery, documents and interviews suggest that it is a serious criminal investigation focused on a $6.5 million bank loan application the college made in 2010 to pay for a $10 million lakeside campus.

The investigation appears to stem from a January 2016 complaint filed by Vermont Republican Party vice chair Brady Toensing on behalf of Catholic parishioner Wendy Wilton, a conservative activist and Rutland City treasurer. Toensing alleged that O'Meara Sanders committed federal loan fraud by inflating the number of fundraising commitments she had secured to buy the 32-acre North Avenue campus from the Roman Catholic Diocese of Burlington. When those donations failed to materialize, the college defaulted on its loans — costing the church, which financed a portion of the sale, between $1.6 million and $2 million.

Neither the FBI nor the U.S. attorney for the District of Vermont would comment on the matter. But according to Carol Moore, who served as the college's final president until it closed last May, an FBI agent who contacted her "three or four weeks ago" called it "an ongoing investigation."

Moore said the focus of the feds' questions was clear: "Was there any collusion between Jane Sanders and the bank?" Moore said, quoting the FBI agent. "Did she falsify records in order to get the loan from the bank?"

Moore said the focus of the feds' questions was clear: Did [Jane O'Meara Sanders] falsify records in order to get the loan from the bank?click to tweet

O'Meara Sanders and her husband's Senate staff have largely ignored questions from the press about her tenure at Burlington College, which began in 2004 and ended with her ouster in 2011. But in an unusual statement issued Monday through the digital services firm Revolution Messaging, former Sanders presidential campaign manager Jeff Weaver noted that Republican operatives were behind the request for an investigation.

"Jane has not been contacted by the FBI or any other authority and only knows as much as news reports indicate," Weaver said in the statement, which noted that he was "speaking for the Sanders family."

"I can't make a comment on that right now," he said, explaining that his attorneys had reached out to federal authorities for guidance about what he could say. "That's typical when you have a grand jury proceeding."

Other institutions and individuals involved responded similarly. Spokespeople for the diocese and People's United Bank, which provided the loan, declined to comment, as did Adam Dantzcher, who chaired the college's board of trustees during O'Meara Sanders' presidency. Christine Plunkett, who served as O'Meara Sanders' chief financial officer and succeeded her as president, declined comment on Monday and then hung up on Seven Days.

Not everyone has kept quiet. Former board member Sara Adsit-McCuin told the paper last week that the FBI had contacted her "a couple of weeks ago" and interviewed her in person.

Rumors of a federal probe have circulated in Burlington for more than a year. When the college announced in May 2016 that it would close due to the "crushing weight of the debt" incurred by O'Meara Sanders, reporters asked Moore at a press conference whether the feds were investigating. She twice declined to answer the question.

But new documents obtained by VTDigger.org last week show that, as late as February 2017, there was an ongoing U.S. Department of Justice investigation — and it involved one of the top federal prosecutors in the state: Paul Van de Graaf, criminal chief of Vermont's U.S. Attorney's Office.

In a December 2016 email to a state Agency of Education lawyer about Burlington College records that the state had in storage, Van de Graaf wrote, "I think we need to make sure that there is nothing significant to our federal investigation before [the records] are destroyed." In February 2017, the AOE attorney, Molly Bachman, informed Van de Graaf, "FBI Special agent Patrick Hanna asked for another month to review records at the AOE. That is fine."

It was hardly the feds' first crack at those documents. According to Coralee Holm, the college's former dean of operations and advancement, the FBI subpoenaed the institution a year earlier, in February 2016, and interviewed Holm on campus at least four times over the next several months.

"I cooperated with their request, which was to provide any documentation that pertained to the purchase of the new property as it related to fundraising for that property," she said. 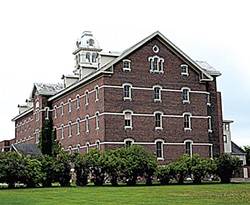 Holm said she turned over a filing cabinet and three or four banker boxes filled with donor files, along with emails she found in accounts that belonged to O'Meara Sanders and Plunkett. She said the FBI provided her with a hard drive on which to transfer the electronic documents.

Despite her best efforts, Holm said, she was "unsuccessful in locating documentation of the gifts and pledges" the FBI was seeking. Asked whether she had stumbled upon anything noteworthy in O'Meara Sanders' emails, the former dean said, "I prefer not to comment on that."

The crux of Toensing's 2016 complaint was that, in order to secure the $6.5 million loan, O'Meara Sanders "successfully and intentionally engaged in a fraudulent scheme to actively conceal and misrepresent material facts from a federal financial institution." Though O'Meara Sanders certified that Burlington College had locked down $2.6 million in future gifts and grants, the school realized only $676,000 of that over the next four years, according to audits.

As Seven Days reported in June 2015, O'Meara Sanders wrote in her 2010 VEHBFA loan application that "one gift of $1-million has been committed and another $1-million has been verbally pledged." In August 2014, Plunkett told WCAX-TV that she had learned after taking the reins at Burlington College that the $1 million gift was actually a bequest — and therefore not immediately available.

"The understanding at the time was that it was a cash gift, and we proceeded until we understood it was a bequest," Plunkett told the station.

Accompanying the loan application was a spreadsheet listing confirmed contributions, the dates they were expected and the initials of the donors. Leavitt, the Naples surgeon, was among those whose initials were included in the document. His late wife, Mary Haas, had been on Burlington College's board of trustees for several years before her 2009 death. Leavitt succeeded her and served until he left Vermont in 2012.

But as VTDigger first noted in a September 2015 story, the spreadsheet indicated that Leavitt had pledged to make two $30,000 contributions — even though the former trustee later recalled promising just one such donation.

"I don't remember doing that," he reiterated to Seven Days this week, referring to the supposed second pledge.

"I didn't exactly understand what their goal was," he said.

The Sanders family was concerned enough about the investigation during the 2016 presidential campaign that O'Meara Sanders' daughter, Carina Driscoll, asked that the school notify her of any press inquiries it received, according to Holm. Burlington College reached out to the campaign "on at least three occasions," she said.

"Carina was very quick to want to be knowing if anything came up," Holm said. "People were making inquiries, so we did make the campaign managers of the [presidential] campaign aware of that, and we kept Carina apprised at the time, but we did not go into any detail."

The senator's critics and opponents have taken note over the years of his wife's rocky tenure at Burlington College.

In September 2014, Skip Vallee — a Shelburne gasoline distributor, former ambassador and conservative provocateur — bought $10,000 worth of television advertisements accusing the senator of hypocrisy because he benefited from a $200,000 "golden parachute" when his wife left the school. An opposition research file compiled by 2016 presidential rival Hillary Clinton and obtained by WikiLeaks includes five pages of news stories about O'Meara Sanders' time at Burlington College.

Toensing himself sought to tie the senator to the controversy in his initial complaint, alleging that O'Meara Sanders' "special political status not only helped enable these apparent offenses, but also ensures her protection from any sort of state scrutiny or enforcement." The Republican lawyer wrote that the couple had "built political careers pontificating against corporate corruption and claiming to want to help the needy" but had harmed the diocese and the "vulnerable Vermonters" they serve.

Though the family's response Monday to news of the investigation was measured in tone, Sanders spokesman Michael Briggs lashed out at Toensing when he filed his complaint in January 2016, calling it "recycled, discredited garbage."

In a statement issued at the time, Briggs wrote, "These kinds of attacks on family members of candidates are one of the reasons why the American people are so disgusted with politics in America today."

US military veterans in a new fight -- against deportation

Bow Legged Lucille has evolved into a magical love affair of...