Viewing his adversaries in the distance, U.S. Vice President Mike Pence traveled to the tense zone dividing North and South Korea and warned Pyongyang that after years of testing the U.S. and South Korea with its nuclear ambitions, "the era of strategic patience is over."Pence made an unannounced visit to the Demilitarized Zone Monday at the start of his 10-day trip to Asia in a U.S. show of force that allowed the vice president to gaze at North Korean soldiers from afar and stare directly across a border marked by razor wire. As the brown bomber jacket-clad vice president was briefed near the military demarcation line, two North Korean soldiers watched from a short distance away, one taking multiple photographs of the American visitor.

Pence told reporters near the DMZ that President Donald Trump was hopeful China would use its "extraordinary levers" to pressure the North to abandon its weapons program, a day after the North's failed missile test launch. But Pence expressed impatience with the unwillingness of the regime to move toward ridding itself of nuclear weapons and ballistic missiles.

Pointing to the quarter-century since the United States first confronted North Korea over its attempts to build nuclear weapons, the vice president said a period of patience had followed.

"But the era of strategic patience is over," he declared. "President Trump has made it clear that the patience of the United States and our allies in this region has run out and we want to see change. We want to see North Korea abandon its reckless path of the development of nuclear weapons, and also its continual use and testing of ballistic missiles is unacceptable."

Later Monday, Pence reiterated in a joint statement alongside South Korean Acting President Hwang Kyo-ahn that "all options are on the table" to deal with threat and said any use of nuclear weapons by Pyongyang would be met with "an overwhelming and effective response." He said the American commitment to South Korea is "iron-clad and immutable."

Pointing to Trump's recent military actions in Syria and Afghanistan, Pence said, "North Korea would do well not to test his resolve," or the U.S. armed forces in the region.

The vice president earlier visited a military installation near the DMZ, Camp Bonifas, for a briefing with military leaders at the joint U.S.-South Korean installation, which is just outside the 2.5-mile (4.02-kilometer)-wide DMZ. Under rainfall, Pence later stood a few meters from the military demarcation line outside Freedom House, gazing at the North Korean soldiers across the border, and then peered at a deforested stretch of North Korea from a lookout post in the hillside.

Meanwhile, China made a plea for a return to negotiations. Foreign Ministry spokesman Lu Kang said Monday that tensions need to be eased on the Korean Peninsula to bring the escalating dispute there to a peaceful resolution. Lu said Beijing wants to resume the multi-party negotiations that ended in stalemate in 2009 and suggested that U.S. plans to deploy a missile defense system in South Korea were damaging its relations with China. 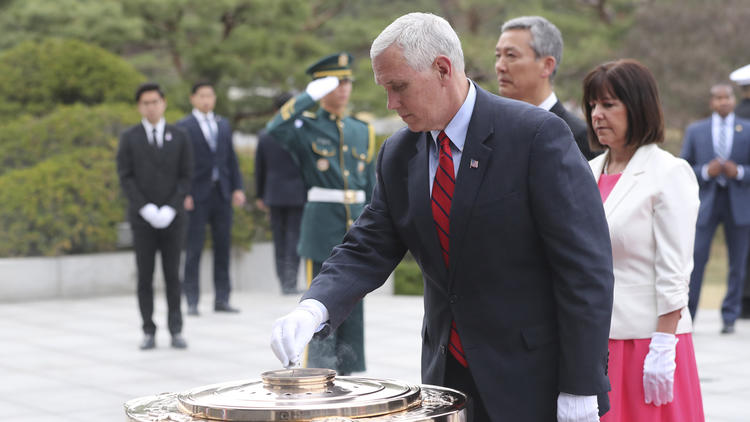 U.S. Vice President Mike Pence burns incense in front of his wife Karen Pence, right, at the Seoul National Cemetery in Seoul, South Korea, Sunday, April 16, 2017. Pence arrived in South Korea on Sunday to begin a 10-day trip to Asia that comes amid turmoil on the Korean Peninsula over North Korea's threats to advance its nuclear and defense capabilities, and just after a failed missile launch by the North.

In Tokyo, Japanese Prime Minister Shinzo Abe, speaking to a parliamentary session Monday, said: "Needless to say, diplomatic effort is important to maintain peace. But dialogue for the sake of having dialogue is meaningless."

"We need to apply pressure on North Korea so they seriously respond to a dialogue" with the international community, he said, urging China and Russia to play more constructive roles on the issue.

Pence's visit, full of Cold War symbolism, came amid increasing tensions and heated rhetoric on the Korean Peninsula. While the North did not conduct a nuclear test, the specter of a potential test and an escalated U.S. response has trailed Pence as he undertakes his Asian tour.

Trump wrote Sunday on Twitter that China was working with the United States on "the North Korea problem." His national security adviser, H.R. McMaster, said the U.S. would rely on its allies as well as Chinese leadership to resolve the issues with North Korea.

McMaster cited Trump's recent decision to order missile strikes in Syria after a chemical attack blamed on the Assad government, as a sign that the president "is clearly comfortable making tough decisions." But at the same time, McMaster said on "This Week" on ABC that "it's time for us to undertake all actions we can, short of a military option, to try to resolve this peacefully."

The Trump administration is hoping that China will help rein in North Korea in exchange for other considerations. Last week, Trump said he would not declare China a currency manipulator, pulling back from a campaign promise, as he looked for help from Beijing, which is the North's dominant trade partner.

Pence warns North Korea 'era of strategic patience is over'

Safety Trips For When You Are Travelling By Plane

Upvote Worthy: This Patriotic Hero Pup Deserves To Be...

Coast Guard Admiral Warns Of Russian Advance In The Arctic

Amazon's Delivery Drones Could Take Off from Beehive-Like...