The missile, presumed to be a Scud type, was launched eastward from the vicinity of Wonsan, Gangwon Province, at around 5:39 a.m., according to the Joint Chiefs of Staff (JCS).

"The flight distance is around 450 kilometers," it said.

The U.S. Pacific Command also confirmed the launch occurred near Wonsan Airfield, saying the missile was tracked for six minutes until it landed in the East Sea.

"The North American Aerospace Defense Command (NORAD) assessed that the missile launch from North Korea did not pose a threat to North America," the Hawaii-based command said in an emailed statement. "U.S. Pacific Command stands behind our ironclad commitment to the security of our allies in the Republic of Korea and Japan." 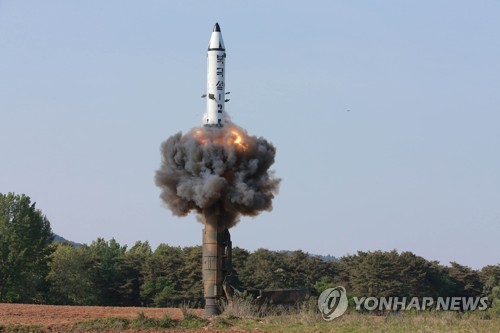 North Korea launches a mid-range ballistic missile in this undated file photo. (For Use Only in the Republic of Korea. No Redistribution) (KCNA-Yonhap)

The Japanese government strongly denounced the North as the missile appears to have landed in waters near its territory.

"This ballistic missile launch by North Korea is highly problematic from the perspective of the safety of shipping and air traffic, and is a clear violation of United Nations Security Council resolutions," Chief Cabinet Secretary Yoshihide Suga said.

The North's Scud missiles using liquid fuel is known to have a range of 300-500 km, mainly targeting the South.

It has recently developed a Scud variant, called Scud-ER (extended range), capable of traveling as far as 1,000 km. It means Japan is within its range.

There's speculation that the reclusive state may be trying to develop anti-ship ballistic missiles against American aircraft carriers.

Monday's launch marked the communist nation's ninth missile test this year and the third since the launch of the Moon administration on May 10, which is seeking to reach out to the communist neighbor.

The North fired a mid-range missile, known as the Pukguksong-2, on May 21 and conducted a KN-06 surface-to-air guided missile test Saturday.

It came as the South is flexing its muscles to resume humanitarian assistance for the North.

Last week, the Unification Ministry approved an application by a local civic group to contact the North for the delivery of mosquito nets and insect repellents.

The decision was viewed as reflecting the liberal Moon administration's desire to reopen dialogue with Pyongyang despite increased military tensions.

"The government will respond strongly to any North Korean provocations, but at the same time, we are flexibly reviewing ways to allow humanitarian and civilian exchanges without compromising international sanctions," a ministry official said.

The international community has intensified pressure on the defiant North.

Wrapping up a meeting in Italy on the weekend, the leaders of the Group of Seven (G-7) member countries agreed that North Korea "increasingly poses new levels of threat of a grave nature to international peace and stability."

They urged the North to "immediately and fully comply with all relevant U.N. Security Council resolutions, and abandon all nuclear and ballistic missile programs in a complete, verifiable and irreversible manner."

The North is banned from conducting any launches using ballistic missile technology under the resolutions.

Aetna is Hiring More Than 300 Work-from-Home Employees with...

Lady Gaga hospitalized, pulls out of Brazil's Rock in Rio

US military has its own private resort at Walt Disney World

Robert De Niro and ex ignore each other during court hearing

How North Korea Could Start a War With America Right Now